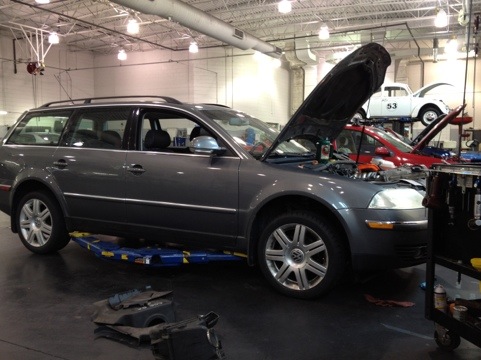 I had a post all written for day, but instead I wanted to tell you guys a cool story about a great customer of mine. I will call her Ann.

This morning I got paged up to the service drive. I walked around the corner, and much to my surprise there was Ann. It had been over a year since I had worked on her car. She moved to another part of the state, and I guess driving 5 hours for service didn’t was just too much. 🙂

She told me that her car was using oil. So after chatting for a minute about that, she tells me what had happen to her car over the last 33,000 miles. She was on a trip in PA. Driving down the highway, her timing belt broke. After getting it towed to the nearest VW dealer, she got the bad news. The engine had seized. I didn’t get the specifics of what exactly happened, but basically she needed a new engine for her 2005 Passat v6. -Side note this car looks just like mine-

The dealer that performed the work did a really good job. She said that they took good care of her while the car was being fixed. Ann made a choice to have a used engine installed in her car. Now, I am not sure that was a great choice, but it saved her some money.

Over the next ~14,000 miles, she found the engine was losing oil, about 1qt per 3,000 miles. This is actually well within an acceptable range, but it was getting worse. Due to the remote area she lives, no one near her wanted to work on the Passat.

Since she was in town visiting friends, she brought her car to me. I had worked on her car for about 2 years before she moved so we know each other pretty well. I bring the car in, and find that the valve covers are leaking oil into the spark plug holes. Not really a crazy repair, but not something that can be fixed in 15 minutes. I had also found a couple of other things that needed attention as well.

We talked about what was needed, and decided that repairing the car was the best choice. Her car is too nice to trade in for something else. I was able to find a car for her to drive so I could keep hers for the day. She went about her business and I am currently working on the car.

I wanted to tell you guys this story because I am really excited to have this car back in my bay. It is such a great feeling to have a customer come back after such a long time and make sure I work on their car! I hate that she had such a costly repair, but I am happy to get her back on the road!

Factory vs aftermarket parts, The pros and cons of each

Why the Customer Is NOT Always Right
0 replies

Pay me now, or pay me later? Is it better to fix it all at once, or break up...
Scroll to top