On Tuesday 11/22, I wrote a post with a story about me getting my butt kicked by a Jetta. I hope that it didn’t bum everyone out.  I will be honest, that really put me in a bad mood that night.  I was going to go out with some friends after work.  I decided to pass on the party, I didn’t think that I would be that much fun to be around.

After stressing out about that Jetta for 2 full days, I went in to work to “face my music”.  I rolled in early to get a jump on what I figured would be a nightmare. When I got to work the first thing that I did was try and start the Jetta.

Before I tell you guys what happened to the Jetta, I need to make sure everyone understands the way a mechanic’s mind works. After a few years of working on the same cars, a mechanics mind adapts to certain things.  You stop questioning WHY the car company does the things they do! Its basically a survival tool.  If I spent time trying to figure out WHY, I would have lost my mind years ago. I try to focus on HOW things work, not WHY they work the way they do.

Ok, so I get to work, I get in and try and start the Jetta. What happens, THE CAR STARTS?!?!?!?! It started right up like nothing was ever wrong. Even as I write this, I have no idea what happened.  I have been trying to build a story where this could happen. I got nothing. I just have to remember not to figure out why!

I test drove the car, ran the test that would not pass, and now the car is good.  Its crazy how the car just sat for 2 days, and “fixed it self’!

Do things like this happen in other jobs, or is this an auto industry thing?

I started this site to help folks with their cars, and to give everyone on inside look at dealer life. I try really hard not to make this a place for me to just bitch about my job. Today however, will be a different story.

The day started out pretty normal. I did a waiting oil change(that is were the customer waits, instead of dropping off their car), and replaced a bulb in the same car. I knew that I had a timing belt to replace when I was done. To be honest, that is the start of a good day!

Well, I worked on the timing belt for a few hours. I usually can’t finish one job without getting pulled off for something else. That is actually no problem for me. I enjoy being the go to guy.  One of those interruption, was the machine shop telling me that a cylinder head I set to be repair, was unrepairable. I will write a post about that story in a few days. With the timing belt wrapped up, time to move on to the next job.

I had ordered a part for a 2008 Rabbit on Saturday. It was a carrier for the passenger side door handle. This is where I think the day turned bad. It took me about 2 hours of messing with the carrier to get it fixed. I had to remove the outside of the door about 7 times. This is on top of the 3 times that I took it apart on Saturday. I skipped lunch to get the job done, but finally finished it.

I looked at a 2000 Passat for the sales department. We do what is called a “Used Car Inspection”. Its a check out of a car before it hits the lot. That car didn’t make the grade.

Next up would be the car that RUINED the day. I had been working on a 2001 Jetta with a really strange fault for the cam position sensor. I narrowed it down to being the adjuster for the cam shaft. In order to replace this part, both cam shafts need to be removed. I have replaced lots of these adjusters with no problem. I went to town on replacing the adjuster. Its not a hard job, just takes some time, and carefully marking the parts before removing them.

I spent about 3 hours going back and forth with the work I did. I stayed about 2 hours late racking my brain, with no conclusion. I still don’t really know what the heck is wrong with the Jetta.  I will be heading in on my day off to figure it out.

Well, basically what I think is that something internal happened to the engine.  I am not sure what, but something went wrong.. I will update you guys when I figure out what the heck is going on.  I am pretty pissed about what ever I did to this car.  I just hope it doesn’t cost the dealer too much.. GRRRRR!

Be sure to sign up for email updates so you know what happens first! 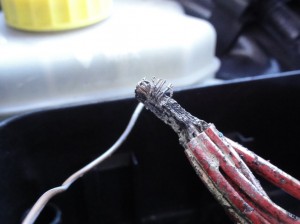 Your probably wondering why a mechanic would be writing a blog post about drinking and driving.  I do not work in a body shop. I am not a paramedic, police officer, or any type of first responder.  I can’t say anything about that side of DUIs.

The side that I see is purely related to vehicle electrics. One of the “punishments” of a DUI is having a starter lockout device installed. Most of us call this a breathalyzer. Basically, it prevents the starter from turning until someone blows into it.

The person that gets the DUI has to pay for this device to be installed, they have to pay monitoring costs, and they have to pay to have it removed. Check out some of the cost of DUIs.Here is where I come in.  It seems that the guys, or gals, that install these devises, do not know much about modern cars.  I have ran into 2 that they have messed up.

The first time I encountered a breathalyzer issue was on a GTI. The girl had the thing installed, then the check engine light came on, and the car would not run. After some initial diagnosis, I found an injector wire that was soldered. Now the actucal WIRE repair was fine, but soldering on modern cars is a big time NO-NO.  It turned out that they fried the engine computer.  This type of repair runs about $1500.  Thankfully for her, the company that installed it, paid for the repair.  Plus note, she is now a great customer of mine! 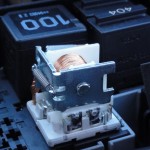 The latest fun with a breathalyzer is actually still going on.  I am not sure how long this guy has had the breathalyzer in his Touareg, but my guess is about a year. His Touareg has had a number of issues over the years.  I mean, the 2004 Touareg had its problems all on its own. This time the car got towed in because it would not start. I spent some time with it and found that the ECM(engine control module) was not being controlled properly. I jumped the power relay (which controls power and ground ironically enough) and drove the car in the shop.

I must have spent about another hour testing different systems. I narrowed it down to the ECM. We told the customer that we would start with replacing the ECM,and go from there. He purchased an ECM from a junk yard. Thats not really something I want to install, but its what the customer wanted so I used it.

After installing the ECM, the car started right up. “GREAT, I fixed it”, thats probably what I said, and I probably said it out loud, because I tend to do that. I put the covers back on with the car running and cleaning the car up. When I shut the car off, the cooling fans stayed on. If I had the Touareg running for an hour, that would not have been a problem. I only had it running for a few minutes. Not knowing if the issue was the used ECM, or something else, I was basically back to square one.

I spend about 2 more hours searching wiring diagrams, and tracing circuits. It turns out the relay that I had an issue with initially, was still the problem. Now the problem was the relay would not release(before it would not activate). So after banging my head against the wall, I decided to pull up the relay plate and just “take a look”. As any tech with a few years under their belt will tell you, “sometimes you just got to dive in and take a look”. 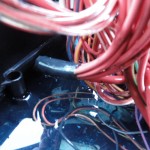 What I found was SEVERAL main power wires that were under water. Even if you are not a car person, you know that electricity and water do not mix. I have repaired tons of wiring harnesses due to water damage. This one is the first Touareg that I have seen it happen to.  I guess when the company installed the breathalyzer device, they did not secure the cover properly. The box is right under the windshield wipers, so water was bound to get in.

The scary part about these harnesses, is VW is not really that clear on where they go. It could just be the connectors under the hood, it could be ALL the wires from the headlights to the taillights.  The only way to know for sure is to order one and see. Most of the body harnesses cost $2000-$4500 for the part, and probably about the same for labor.

The crazy thing is, the car is just in a holding pattern. The customer is fighting with the company that installed the breathalyzer to make them pay for the damage. They say they are not responsible for ANYTHING. To the customer point, they are the one that messed his car up. On the company’s side, if he would have never got a DUI, it would have never been a problem.

I am not really sure what will happen with this repair. I will write a new post as soon as I get an update.  Be sure to subscribe for all the updates!