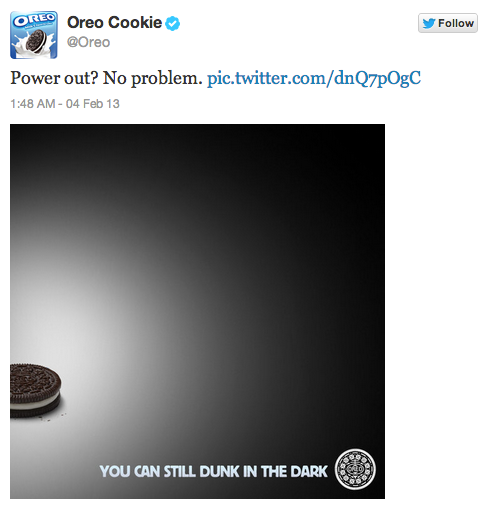 I am sure by now you have seen non-stop coverage of the this years Super Bowl. From the game coverage, commercial coverage, and cooking shows, we have been full throttle for The Super Bowl. I even read an article about why the Puppy Bowl is better than the actual “Big Game”. Yeah, I really did. 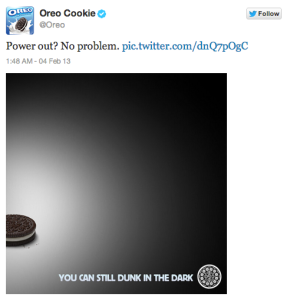 This year, like most years, I don’t really care who wins. I think the game has become an overdone spectacle. Even the commercials are ridicules. All that changed for me last year when I hopped over to Twitter and followed the action there. There are some brilliant folks that were on their game last year. Like this little gem from OREO, when the power went out. I am all about the banter that companies have back and forth.

This year didn’t disappoint either. Overall I thought the commercials were good, not great. I got the feeling like companies were all about getting a big movie star, but no content. But there were a few gems in the mix. My favorite was the commercial from Jaguar.

I was really looking forward to seeing what VW and Audi would bring to the table. The VW “Wings” commercial was not too bad. The idea of “when a VW hits 100,000 a German engineer gets their wings” is funny. What was even better was what Victoria’s Secrets had to say about it. 😉 I also had to throw my 2 cents in too.

No rainbow? RT@VictoriasSecret: Imitation is the sincerest form of flattery. Thanks, @VW. #SB48 pic.twitter.com/WwZaUOGSCR

Audi had a commercial that I didn’t really get. I guess I got it, but didn’t care for it. Oddly enough Budweiser had the best Audi ad of the night. It is always hard for me to like a “Bud” ad. I don’t like the beer. I don’t like the company that owns them. I don’t like a lot about all “Big Beer”. But when it comes to Super Bowl ads, Budweiser has it on lock down. It is also easy to win me over with really cute puppies. Note the Audi ad at 47 seconds

Overall I had a great night watching the game, and hanging out on Twitter. If you are not big into things like Twitter and Instagram, I urge you to check it out. At least for “Big Game” type events. What did you think? Did you have a favorite commercial? Post your thoughts in the comments below. I am sure I missed some good stuff.

One More Update
I will be doing some traveling this week. For some crazy reason, I thought going to Chicago in February was a good idea. LOL Actually I will be doing some coverage of the Chicago Auto Show. For those of you that don’t know, I grew up just outside of Chicago. So the Chicago Auto Show is near and dear to my heart. Look for some cool stuff regarding that. Also, I am sure I will be complaining about how cold it is. 😉