It has basically been forever since I have done a post about the VW Cabby. Today I want to give you all some updates and show ya some pictures of how the Cabby sits right now. I have owned that Cabby for just over a year now. All things considered I am pretty happy with the progress. I am hoping to have her one the road before the end of summer. Should we all take bets on whether that will happen or not? LOL 😀

The VR6 Build
The rebuild of the VR6 engine is almost complete. The long block(engine block and cylinder head) are built. Most of the accessories are installed. The water pump is the only thing that needs to be installed before the engine goes in the Cabby. The transmission is all painted up. I still need to paint the axle flanges, and install new axle flange seals. I am thinking by Saturday the engine and transmission will be bolted together. THAT is exciting. 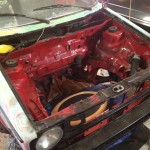 Working on getting the engine bay ready

The Cabby Engine Bay
This is what I have been working on the last few nights. Cleaning, sanding, cleaning, cleaning and then more cleaning. There is an amazing amount of dirt and grime that sticks to the engine bay of a car. I have no intention of doing the “shaved bay” thing that many other are doing. I think that is a really cool thing to do. I would just like to drive my car some time this decade.

The Interior
I can sum up the interior of the car in 1 word, DISASTER! The interior is pretty much stripped. I wanted to be sure I could run the new wiring neatly. Plus I wanted to remove the last of the sound dampener from behind the dash.

What is left?
When I start to think about all the things left to do, it gets overwhelming. Here is a quick list of things I still need to do or to get:

I am sure that I have many more things that I am forgetting. I am learning that the key to staying motivated during a build like this is to celebrate the small victories. Getting the engine bolted into the car will be my biggest victory yet!

Well, that is where we stand with the Cabby! You can check out all the Luv-A-Dub progress at MK1 VR6 Cabriolet. Also a big shout out to Justin at GermanAutoParts.com and Mike and the boys over at EuroWise!

Working on getting the engine bay ready

I still have some cleaning to do, but the engine bay is coming along

The transmission is all painted!

I told you the interior was a disaster

My wife made a hop stencil, I thought I would give it a test drive on the Cabby 😉 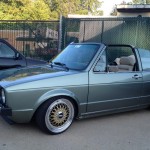