Hi everybody! You read the title right, Shop Shots are BACK! We are on volume 58 of the pictures that give you a behind the scenes look at automotive service. For those of you that are new to the community, all of these pictures are taken with my Iphone 4s(for now 😉 ) One quick thing before we get into the pictures. I am working on getting the email alerts system worked out. If you have subscribed to updates, you should be in the new system. If you have any problems please let me know. You can contact me, or email me Charles(AT)humblemechanic(dot)com. I hope to have it totally worked out in the next few days. Alright, it is picture time. 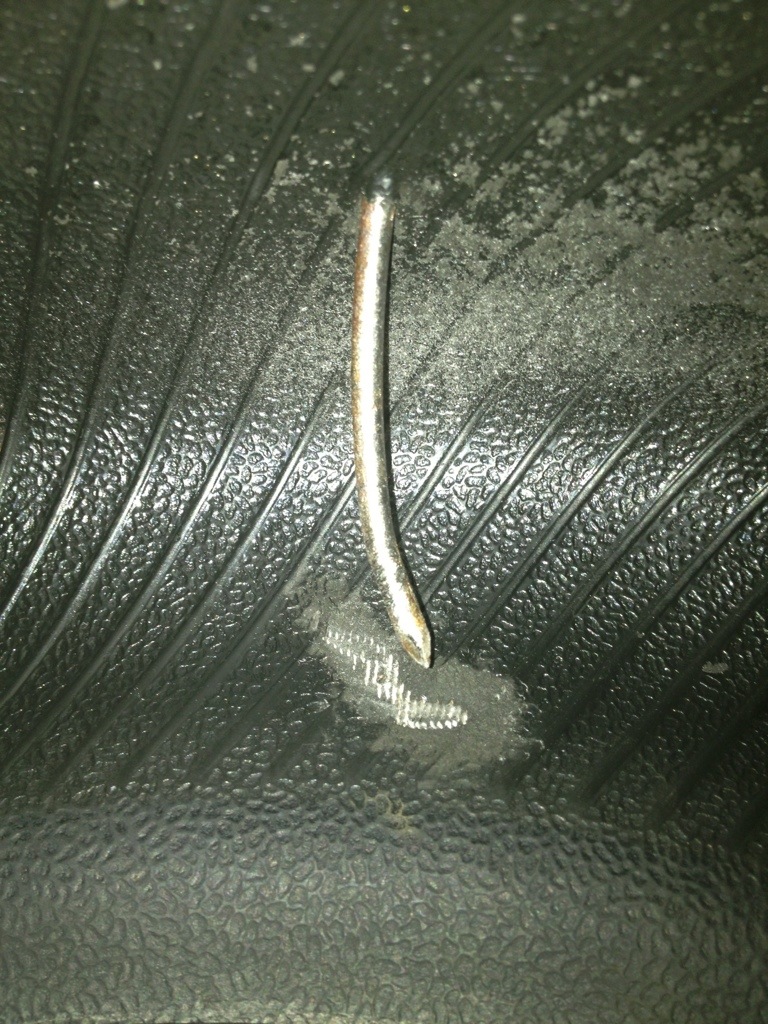 This type of thing really stinks. A customer came in for a tire that was loosing air. The nail entered the tire pretty close to the edge. Based on the place the nail entered the tire, it looked repairable. When I took the tire off the wheel, I didn’t expect it to be a giant nail. As you can see, the nail dug into the inner part of the tire. This damage can compromise the sidewall of the tire. Any time something like this happens, the tire needs to be replaced. Luck for this customer, she bought the wheel and tire coverage. I should do a post about the “extras” that dealers try and sell you. Some are junk, but the wheel and tire coverage is worth the money. 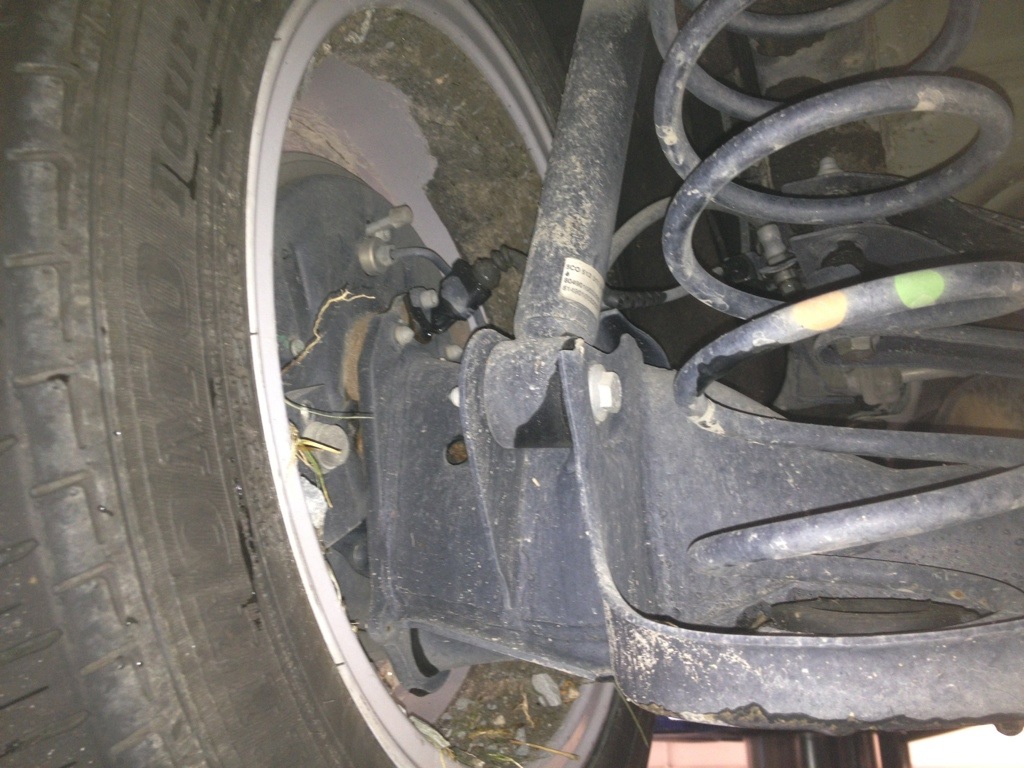 We are continuing the the tire theme. I didn’t really plan that, it just happened 😉 This customer brought her car in for a basic service. She also mentioned that she thought her car had a vibration on the highway. As part of the service she was getting we balanced the tires, and do a ton of visual inspections. The tech that was working on her car, found that the left rear wheel was packed with mud and rocks. This probably added a pound of weight putting the wheel assembly out of balance. When I told her, and showed her this exact picture she just laughed. She lives on a gravel road so this type of thing happened to her all the time. The tech cleaned the junk from the inside of the wheel and she was good to go! 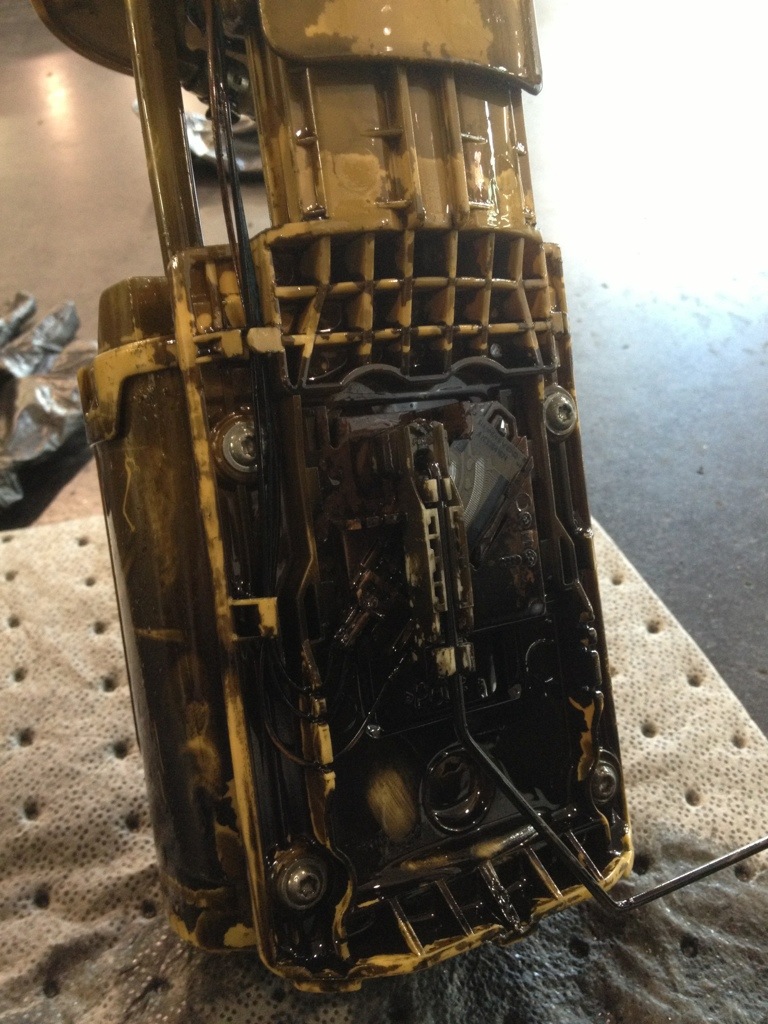 There is so much talk on the internets about VW diesels. Everything from the high pressure fuel pumps that “always” fail on the new TDIs, to failing cam shafts on the older Pump Duse engines. I wrote a post a long time ago talking about the Volkswagen TDIs. My opinion is basicly the same as it was back then.

What you see in the picture is the fuel pump that lives inside the fuel tank. It is coated in black goo. That goo is the result of failing seals in the fuel injectors. The bad part about this repair is it can be expensive. The issue of failing seals gets worse because of the high compression of the TDI. That causes the injectors to walk around in their holes. The “walking” causes the holes to no longer be round. So what is the repair? A new cylinder head to the tune of $5000 or so. Never a fun thing to tell a customer.

Well friends, that wraps up this weeks Shop Shots! I know it has been a while be it really feels great to be back in action. Remember if you have any topics you want to talk about just post them up in the comments of a post. I always like to know what you guys want to know about. Hopefully the email thing is worked out and you all can get the updates again.

It is no secret that VW has a huge share of the diesel market for passenger cars. As we push for better and better fuel mileage, I have seen TDIs become much more common. It is not just “those diesel people” anymore. With the expanded range of customers that are now in our TDIs, we see issues that we never seen before.

The TDI that was in the 2002 Jetta was a GREAT engine. We refer to is as the “ALH”. That is the code that VW uses to identify that engine. If a customer were to mis-fuel that engine the repair was simple.

I have only seen 1 “ALH” that was mis-fueled. BTW, if this happens to you, and there is damage, don’t blame me. Just Sayin

Enter the next generation TDIs. Here is where we get more customers buying diesels. Now we have the average driver buying TDIs, not just the TDI folks that usually are INSANE about their cars. I use the word insane in a positive way. 😉

This is when I started to see more and more cars that were filled with GAS, instead of diesel. The Pumpe Duse engine was still mostly forgiving when it came to mis-fuel. The car would just stop running. The repair was very similar to the “ALH”, just something we did more often.

In 2009 we got the “Common Rail”. A highly advanced very complicated TDI setup. The high power, and great fuel mileage were a huge draw. Especially since we had just seen gas prices over $4 for the first time ever. With improved sales came more mis-fuel issues. Unlike the last two generations, this TDI is not forgiving what so ever. When someone puts gas in the Common Rail (CR for short), all that is takes is cranking the engine to do damage.

If the car is started, usually it will be driven until it stops running. What that means is gas is in the entire fuel system. Due to diesel and gas having totally different lubrication properties, this makes the fuel pumps fussy. They start doing bad things like coming apart on the inside, and spraying metal throughout the fuel system. The resulting repair is fuel system replacement. Every part that fuel touches gets replaced, from fuel take to fuel injector! This repair costs about $7800 for parts and labor. OUCH!

Not really a fun time for anyone is it? This is one of the reasons that I am not ALL IN on diesel. I don’t trust myself to properly fill the car. I love the technology, but you MUST be the right person for it.

It does bring up a really good question. Is this the fault of VW, the customer, or the company that made the parts? Yes if you put gas in your car it’s YOUR fault. BUT, shouldn’t the parts be designed with some type of fail safe? Should the fill neck be different so you CAN’T mis-fuel?

~To prevent anyone from ever mis-fueling a car again, just share this post.(ok, that wont happen, but it might be a ‘Humble’ reminder 😉

VW has been a strong diesel supporter for many years.  In 2009 they released the Common Rail engine.  This new Common Rail (CR) engine is very powerful, fuel efficient and ultra clean.  VW dealers have a hard time keeping them on the lot, because everyone wants them.

I have been asked a couple of times over the past week or so, “Should I buy a Jetta TDI?”  My answer usually surprises people.  I almost always say “NO”.  That is always followed up by, “Charles, they get 40+ MPG”.  I know they get great mileage, but a TDI is not for everyone.  Here are some reasons why I would give a TDI real consideration before jumping right in.

According to the U.S. Energy Information Administration, I know that sounds fake!  Regular unleaded fuel is about $0.20 cheaper a gallon than diesel.  Yeah, I know its only a couple of bucks for each fill up, but remember in 2008 when diesel was $0.40 more per gallon?

As little as 1% of gas in the fuel will cause catastrophic damage to the fuel system.  At this point, I dont think that the diesel quality in the USA is high enough.  I have replaced, or have seen several fuel systems replaced because of bad fuel, algee in the fuel, or because gas was put in the tank.  A few gas in the tank issues were the customers fault, some were proven that the station had the wrong fuel in their tank, and some are still unknown. Its a much higher risk than having bad gasoline

Maintenance costs are higher over the life of the vehicle

The current TDI needs a fuel filter at least every 20,000 miles.  This will run you about $80 at the dealer.  At 80,000 miles, your car will need a timing belt.  Get ready to spend $1200 or so on that.  The other common VW engines are chain driven and do not have a maintenance interval for replacement.

Based on all that, I dont think that a TDI is right for a lot of the people that buy them. They need more love than other VWs do.  I will say that I really do like diesel technology.  I think for the person that burns up the road, a TDI is perfect.  It bothers me that people will buy a TDI without the proper research.

I do support our TDIs.  I think its a great engine. In heavy traffic, the air coming out of the tail pipe is cleaner than whats coming into the engine.  So before you buy a TDI, make sure its right for you and it fits your vehicle needs.

Post what you think in the comments.  I know there are lots of hardcore diesel folks that would not trade a TDI for anything, but thats not most people.