Today on the Automotive podcast, we are talking about work! We dive into the differences between:

Many techs have a strong opinion about doing warranty work vs doing customer pay work on cars. There are pros and cons to both types of jobs. This is the Flat Rate video I mentioned in today’s show.

If you are having trouble viewing the video on the blog, see it at Customer Pay VS Warranty Work on YouTube

As always, thanks for watching. What are your thoughts on customer pay repairs vs warranty repairs? I know many of you have strong opinions on this topic 😉

Have an idea for a show topic? Is there a question you have always wanted to ask a tech? Feel free to post them in the comments, or use the contact me form. I want to be sure I give you the types of shows you guys are looking for.

Last week I told you about a few Crazy Customer issues that we have had. Well, as luck would have it, we got a few more. Let me just be clear that I am not really picking on these customers. It is all in good fun.

Customer States that with the  windows all the way down, there is a popping noise randomly like the “SORRY” board game, advise

This concern came in on a 2011 VW CC. When the customer was explaining what the car was doing, it was pretty clear what he meant. It was funny because I have never heard someone use a board game to describe an issue with there car. I test drove the car with the mechanic working on it. He found a way to reproduce the noise, and we were quickly able to find the problem.

Now, I am not 100% up to speed on board games. It has been forever since I have played the game “SORRY”. I do not really remember it being anything more than a dice game. My curiosity got me. I did a little bit of searching and found that the game he might have been talking about was “TROUBLE”. It has that popper in the middle. I was not able to confirm with the customer, but I am sticking with my guess. He was not that far off~ “TROUBLE” ~”SORRY” I totally get that!

We had to order a part to fix his popping noise, I will try and ask him when he comes back.

Customer states, something sticky went down by the center vent and now the vent won’t adjust-please find out what is going on 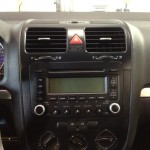 This is the vent that had syrup in it

That is what the concern line said on the repair ticket. After talking to the customer I found out what really happened. The customer spilled syrup in the upper center vent of his Jetta. The vents on the Jetta are near the top of the dash, and above the radio. How the heck does one still syrup in that vent? Also, who has open syrup in their car while they are driving? AND WHY???

The customer made it clear that I had to be very careful when trying to move the vent. He said it felt like it was going to break. Not wanting to break it, I told him he has 2 choices

The only issue I had with cleaning the vent is, we did not have it in stock. He would have had to pay twice. Once to remove and attempt to clean, then again to remove and install a new vent.

He wanted me to just remove the vent so he could clean it. I had to explain to him that he would still have to pay for that. He said that he would just take care of it. To be honest I was cool with that. I didn’t really want to clean goopy syrup out. Thinking we were done, I wished him well and started to walk away.

He called me back and asked me to SHOW him how to fix it. I have him a quick over view of how the vent comes out. He then asked me my favorite question.

How do I do this, and not mess it up?

I reply, with a smile, “You let me do it for you sir”. 😉 He laughed and said thanks but he was not going to worry about it.

I don’t think that I want to make a habit of poking fun at customers. I just like to save a couple and share them from time to time. We all have silly things in our jobs that happen. Sometimes it is nice to trade stories.

Does anyone know another board game that has a popper on it? Just wondering?