Hey folks! Today we are back with a “Behind The Wrench”! Today we have Joe, he has been around the industry for about 23 years, and works in a body shop! I am sure he has seen some crazy stuff especially when it comes to accidents. 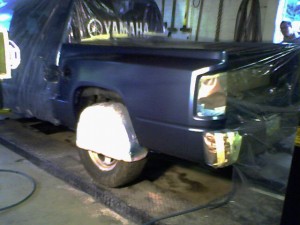 This Truck is all taped up and getting some paint action!

How long have you been in the Industry?

What is your current job title?

What were you doing for your first automotive job?

Do you currently work at a Dealer, or in an aftermarket shop, do you prefer one over the other?

Aftermarket / Never worked at a Dealership

Walk us through what you do on a daily basis.

Almost anything from an oil change to replacing an engine.
Being a mechanic in an independent auto body shop there is no routine.
I even do some of the collision repairs when we are busy.
Most of my work is rebuilding busted up suspensions.
We / I don’t do transmission, transfer case or differential overhauls and
can’t do some of the major engine repair so computer related issues.
Mostly cause of not having the correct tools or equipment.

When you are not working on or with cars, what do you like to do?

I don’t really have any hobbies but do like surfing the internet, watching TV / movies, and play with my dog.

What kind of car do you drive?

What was your first car?

What made you want to work on cars?

I’ve always had a passion for them (what makes them tick) since I was about 3 or 4 years old.

What is the weirdest thing that you have found in a car, that should not have been there?

I don’t know if Snakes count a weird since the cars were park in a field but they definitely
didn’t belong there.

Do you have much customer interaction?

About 99% for customers just wanting mechanical repairs.
I give them estimates, schedule them in, order parts, do the repair, do the bill, and call them when the work is completed.

What is your favorite part of your job?

For the most part I’m my own boss.

If giving the chance, what would you never do again at work?

I can’t really think of anything.

The auto industry has a really bad rap, what do you say to someone who thinks you are trying to take advantage of them?

That don’t happen very often, I can’t think of a specific situation of what I did tell the customer.
I can think of three and what I did tell them that I don’t think I’ll ever forget:
One customer’s car had a very slow brake fluid leak, I found it and told her the price of the part (dealer only part).
She went through the roof, took it two another shop, they told her it wasn’t the part I told her and replaced something else.
It still leaked, she took it back to them and they told her it was the part I told her it was to begin with. She call me and
wanted me to replace it, I told her have the other garage put it on cause she called me up complaining and calling me a liar.

I did a State Inspection on a Jeep, the guy calls up the next day raising hell because the battery was dead and it wouldn’t start.
And how he work at a law firm, and I didn’t do my job, etc. I tried explaining to his that the batteries state of charge was not
part of the Inspection procedure. He didn’t want to hear it, I had enough of his big mouth and hung up on him.
He called back about ten minutes later and apologized and actually let me explain what got checked during an Inspection.

I did a State Inspection on a W- Body GM car and found the front brakes would not pass. Told the owner and he starts telling me
that so and so up the street just checked them and said they were good. At the time (so and so) didn’t do State Inspections.
On this particular vehicle you cannot see the inboard brake pad with out removing the caliper (which I did), so and so didn’t.
I showed him and he was content, not too happy with the other garage.

Of all the maintenance that cars need, what is the ONE that will keep my car healthy the longest?

How important is reading your vehicles owners manual? 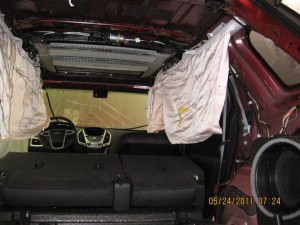 I don't get to show you guys deployed airbags, this is what they look like,kinda saggy huh!

Very important, more than most vehicles owners think.
I’m a mechanic and I refer it on customers vehicles.

Have you read the owners manual to your car?

I skimmed through it cover to cover cause I knew there was not too much I didn’t already know.
And the fact that I can refer to it when I need too cause I will never remember everything in it.

What tool in your tool box do you use the most?

Is there a brand of tool that you prefer?

I prefer Snap-On for most tools.

If you could only use 3 tools from now on, what would they be( and why)?

A hammer, screwdriver and pliers.
If I can’t fix it with them then “sorry you gotta take it somewhere else”.

If you were building a “James Bond” car, what is the one thing you would add it?

“Censored”  I actually got the idea from another movie, just can’t remember the name off hand.

You are sending your kid off to college, what car would you buy for them?

Probably some sort of compact SUV, Ford Escape or something like it.

What is the one thing that you want folks to know about your job that they might not know?

I’m not by any means getting rich from being a mechanic and the tools I have to have to do my job are expensive which comes out of my pocket.
I guess that is three things, but I don’t think a lot of customers know that.

Awesome interview Joe! Thanks for the insight! You can check out some of Joe’s work on his Facebook page. The pictures are not private, so head over and check them out!  If you have a question for Joe, just post it in the comments! Also if you would like to be featured in an interview, just contact me and we will get it done!

If you enjoyed Joe’s interview, select one of the buttons below, then click it. Come on, Its Friday(Friday, we’re gettin down on Friday)