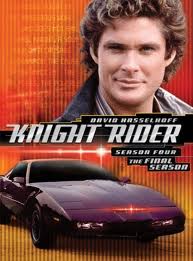 Today I wanted to shift gears a little *side note, that pun always cracks me up* We talk about some serious stuff around here. I tought it would be fun to switch it up.

I mentioned on the Facebook Page yesterday that Netflix now has Knight Rider on streaming. Not the one from 2008, the original one from 1982. I remember watching this show as a kid. I was pretty little when it was on TV. But who could forget that theme song, or that awesome red light on the front. It was so cool to hear a car talk, and it had turbo boost!

Now I watch the show as an adult(subjective) and a car pro, I see all the 80’s “cheese” the show had. Tons of plot holes, amazing acting, cornball special effects, you name it, Knight Rider has it. But around all that cheese was a car that is extremely futuristic for the time. I want to look at a few features that KITT had, and how they car common in today’s cars.

I am sure we could spend all day talking about cool “future” cars. So saying that, what was YOUR favorite “future” car? Post it up in the comment section! And now, you will have the theme song stuck in your head all day 😉

Leave a Reply to Jeremy (in pgh) Cancel reply

Call In Your Questions
Scroll to top