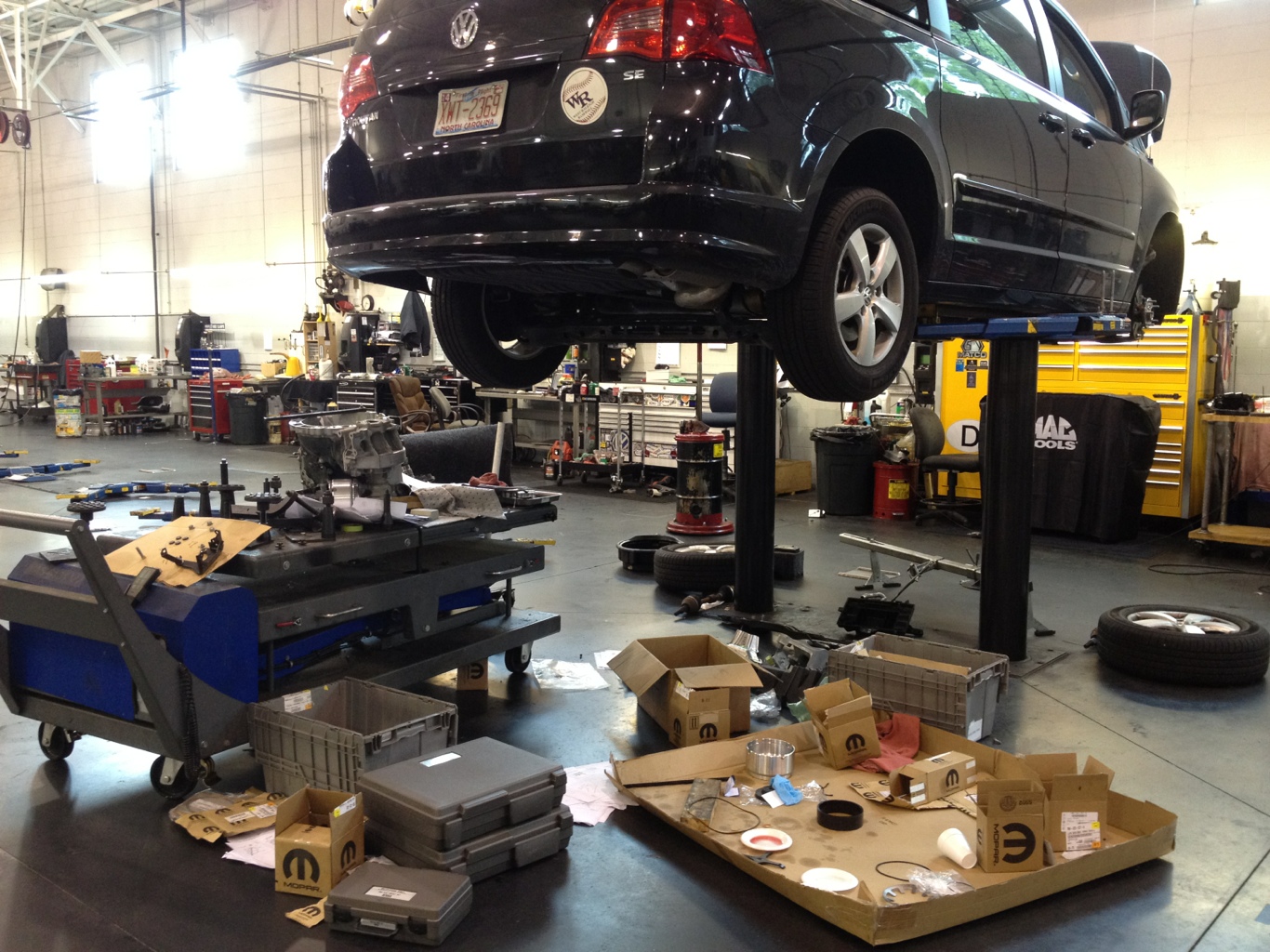 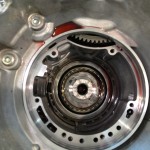 This is how far down the transmission was disassembled

I have posted a few pictures of this battle over the last few weeks. The guys of a automatic transmission, and the VW Routan downed for several weeks. Now the the car is finished, I can tell the whole story. Some of the details are a little fuzzy. I was the 3rd mechanic involved, and most of the information I got was well beyond second hand.~Oh, and the names have been changed to protect the innocent~

In mid April, a customer brought their VW Routan in for service and a few concerns. The mechanic that got the job is one of the senior level guys in the shop. I think that he has more experience working on cars than anyone in the shop. On top of that, he is a really smart guy. I will call him Jim. The customers concern was the van would roll back while on a hill. Jim proceeded in the proper manner for diagnosing the vehicle. Attempting to duplicate, then making sure there was an issue. He test drove another Routan, and that one did not act the same.

Before proceeding with a transmission repair, Jim called VW technician help line. That is pretty standard when in comes to trans repairs. The guy at tech line advised him to remove the transmission, disassemble it, and try to find an issue. I am sure that Jim could not contain his excitement knowing he was about to remove, and disassemble an automatic transmission.

So far so good, but here is where the story gets crazy. See Jim, at the time, was on semi light duty. That means he would not have been able to remove the transmission. That job is about as far from light duty as you can get. The service manager shifted the removal of the transmission to another mechanic. Lets call him, Ted. Ted removed the transmission. He did an outstanding job labeling each part, bolt, and connector. That would make it easy for anyone to reinstall the transmission. As “luck” would have it, Ted went out with an injury about a week later. He is still out of work, but doing better. 🙂

The transmission is now on the work bench waiting for Jim to disassemble, and diagnose. This is not really a job that any of us in the shop do very often. On top of that, this is NOT a VW part. The transmission is a Chrysler part. Jim spent some time disassembling the transmission. At that point, I am not sure that he found a problem. I do know that he ordered some parts needed to reassemble and started the process of putting it back together.

I was off while when the reassembly started. I get a text from the service manager asking me to come in and help him out. I was not able to come in that day, but I was more than willing to help Jim when I got back to work the next day. When I come into work the next day, I find out that Jim is now out on medical leave. Due to the fact that I am the only certified Routan mechanic in the shop, I get the honer of putting it back together.

Just to recap, we have one mechanic remove the transmission, another take it apart, and now a third

mechanic to put it back together. No problem right? Think about it this way. Imagine a 10,000 piece 3d puzzle. Each piece fits both ways, you don’t really have a clear picture of what it looks like, and the only way to now if it is right, is to finish. No problem right? 😉

I take about an hour to evaluate the entire situation. I am trying to find the logic that Jim used to disassemble the trans. To he honest, I don’t think that he did a great job organizing the parts. He might be able to figure out what is happening, but few others would. 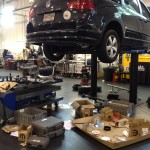 Here is the mess that I came into

As I start my journey, I have the following aids

Armed with as much information as I can find, I spend about half a day putting the guts back together. Finding that I had to order some more parts, the job was on hold for a few days. I came in on my day off the next week. I spent almost the entire day at work finishing assembly, and then installing the transmission. I was not able to finish the trans install, so I went in to work on my next day off to wrap it up.

I finished the install. Then started the car. Yay, it starts, things are looking good so far. Next I test reverse. Wheels roll in “R”. All of that uncertainty I had about the repair was starting to go away. I shift the van into drive. NOTHING. Wheels don’t turn. I shut the car off, thinking that if I just try again, everything would be fine. As you might have guessed, it wasn’t. I spent about an hour going over the things that I could see. Nothing jumped out and said “HEY YOU SCREWED ME UP”.

I had never felt as defeated in my career as I did at that moment. I had just spent my 2 days off plus half another day rebuilding this transmission, only to fine that I did something wrong. After a few phone calls, and a couple of other tests, I knew I was pulling the transmission back out. Our regional guy came out to help me out. We did some further testing, but the conclusion was the same. The transmissions was coming out.

I pulled the transmission back out of the van. Then took it back apart. As I 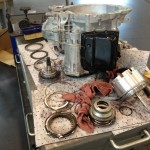 got to the point where I first start, we find the problem. 1 missing seal. 1 stupid seal missing. I was not really happy that I didn’t put that seal in, but I was glad to find a fixable problem. I ordered some parts, reassembled the transmission, and put the van back together. This time SUCCESS! all gears shift properly. The van drives great.

The van was in our shop for over 6 weeks. The customer was in another Routan for the entire time. As of right now, I think they are getting a new van. They were pretty awesome about the entire situation. I totally feel bad they were stuck in limbo for so long.

I checked the time that I had into the job. Over 30 hours of work time on this van. All things considered, I got paid okay on the job. I was able to get paid for both repairs. I am pretty thankful for that. I am really glad to put this job behind me. 🙂

The Down Side Of Being An Automotive Mechanic

Behind The Wrench, Auto Mechanic Interview with Joseph Frederick

Mechanic and Shop Safety – It Goes Beyond Cuts and Burns

What Exactly Is A Master Certified VW Mechanic
Scroll to top